To know chess notation helps you to read and replay chess games that you find in newspapers and in chess books. You should be able to replay games in order to see the position for real on your board.

It is hard to replay games in your head, some players can do this, but still you understand moves better if you see the position right in front of your eyes.

I recommend you learn the Algebraic notation which is now standard among all chess organizations, it is also used in most books and newspapers. It is short, straightforward and clear.

You simply identify each square of the chessboard by a letter and a number. 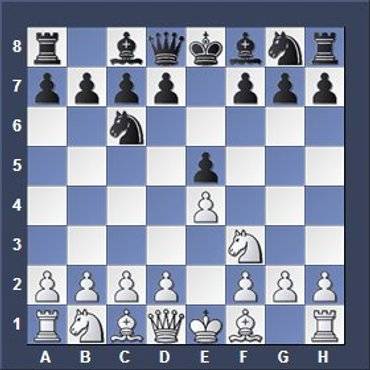 This means, at move 1, a pawn goes to e4, another pawn (Black moves) goes to e5.
These are very popular starting moves. (See position above)

Second move is: a knight (White) goes to f3 and a knight (Black) goes to c6. The N is used for Knight (stands for Nightrider) because we need the K for the king.

Each piece has its own uppercase letter.

If you capture a piece or a pawn you use x

For example: 3.Nxe – white Knight captures e-pawn at move three. In this game above it would be the senseless move Knight on f3 captures the black pawn on e5. After this Black would play NxN and White has lost a valuable knight for just one pawn. NxN means Knight captures Knight.

To give a Check

If you give a check add + to the piece that gives the check.
For example: 14. Ne5+ This means, at move fourteen a white knight is going to e5 and gives a check. This is the first “half-move”, so it must be White who has moved. It must be a white knight as White can move only white pieces. Simple logic.

To give a Double Check

If there are two identical pieces which can move to the same square then you just add the letter of the square where it comes from, to clarify which piece has moved.

In the game below you can see the chess notation. You also learn that it is not wise to grab material at all cost as this can ruin your position. White took all the material he could get but soon ran behind in piece development. He got overun in the center and lost through checkmate.

Replay and study the Chess Game

Back from – Chess Notation to – Chess Tips
Go to – Chess Strategies – Home
Privacy Policy  About Me/Disclosure  Contact
Disclaimer
We use cookies on our website to give you the most relevant experience by remembering your preferences and repeat visits. By clicking “Accept All”, you consent to the use of ALL the cookies. However, you may visit "Cookie Settings" to provide a controlled consent.
Cookie SettingsAccept All
Manage consent