Afraid of endgames? Don’t worry, many games are won or lost already before they reach the endgame. However there are some important endgame positions and procedures you should know.

If you have a king and a pawn versus the king only you have to know how to deal with it correctly or you ruin your game.

Will your Pawn be captured?

Before you trade off everything to reach an endgame like this, make sure you have estimated beforehand if your pawn will be able to reach the last row or not. If you have miscalculated the opponents king will reach your pawn and capture it.

In the position below the black king is too far away. The pawn will win the game as the king cannot capture it. 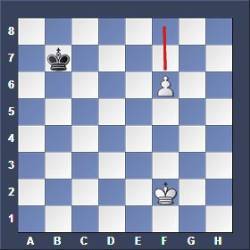 If the black king is within the square he can capture the pawn, no matter who’s move it is. In the position below the king is outside the square. If it is White’s turn then the pawn will run and promote into a queen and White will win.

If it is Black’s move then the black king will move into the square and will reach and capture the pawn finally, which is a draw. 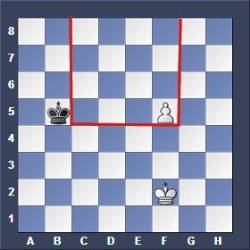 If you create the square in your mind you start looking at the pawn and pull a line mentally to the last row. Then you count the number of squares from your pawn (inclusive) to the row.

Then you create a square (in this case 4×4) and figure out if the opponent’s king can reach it or not. If not, you start trading off the remaining pieces to enter this endgame.

If your King protects your Pawn

If your king is close enough to protect your pawn the question arises if you can promote your pawn or not.

If TWO of the following conditions apply, you can bring your pawn to the last row to promote it into a queen and win.

1. King is placed IN FRONT of your pawn
2. King is placed at third row (counted from the last row where promotion takes place)
3.You have OPPOSITION AND your Opponent must move.

The edge pawn (a-file pawn or h-file pawn) wins only if you can keep away the opponents king from the corner square. 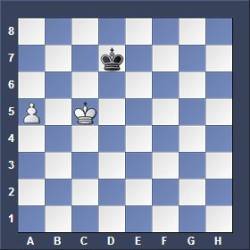