This variation is called the Berlin Defence. It is part of the Ruy Lopez Opening and is very solid for Black and hard to beat. Black doesn’t waste time to push the a-pawn to a6 but develops the kingside knight to f6 instead and relies on fast piece development.

This opening variation has the reputation of being very drawish as often the queens get traded off early and the endgame is reached quickly. 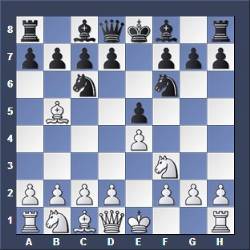 Download PGN
Back from Berlin Defence – to – Ruy Lopez Opening