The Scandinavian Defense (1…d5) is a chess defense for Black and a dubious answer to 1.e4. This opening is not played at top level chess tournaments and matches.

Black’s queen comes out a bit early and gets pushed around a few times. This answer to 1.e4 doesn’t seem logical to a chess players mind.

However, this chess opening gets played by second rank chess grandmasters to surprize the opponent. 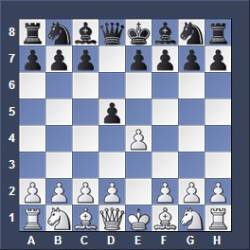 Back from – Scandinavian Defense to – Chess Opening Moves