The Sicilian Defence is a popular weapon for Black and leads to sharp tactical-rich positions. This chess opening is played often in chess tournaments by all kinds of players and is used by grandmasters at top level chess events.

Black’s idea is to create an asymmetrical structure that allows to play for a win. After the white move 3.d4 Black answers 3…cxd which creates an half-open c-file on which he will apply pressure placing a rook there. Sharp tactical operations occur in the center as well.

White plays in the center and at the kingside.

To master the Sicilian an immense amount of theory has to be learned. This can be done by buying various books about the Sicilian. One book will not be enough as there are many different variations and set ups. 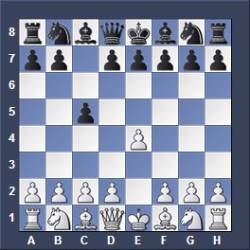 Back from – Sicilian Defence to – Chess Opening Moves