All Comments are by chess professional Grandmaster Bogdan Lalic who makes a living from chess and is travelling in Europe from tournament to tournament.

“In the following game the ex-World Champion Anatoly Karpov escapes with a draw after being lost from the opening with White pieces with just a mere 15 moves! His opponent GM Alexander Matanovic had very decent score against Karpov and Fischer ( against Karpov 2 draws and against Fischer 3 draws and 1 loss – you have to bear in mind that Matanovic had 5 times black in those games!!! ).”

“This reminds me on the case of American GM Walter Browne who had 50% score against Fischer and Spassky ( all 7 draws, 1 against Fischer and 6 times against Spassky ). In those games he could have even won some games. Neither Browne nor Matanovic ever qualified for the Candidates tournament. Food for thought!”

“World Champions are sometimes very lucky and escape from defeats. Is it because their opponents are too nervous and subconsciently scared of win? Or maybe because medias portrayed them as invincible their opponents play in fear?”

“There is no secret that many chess players used hypnosis in order to get top results at chess. The father of hypnosis used in chess is Dr Emmanuel Lasker.”

“In the Old Magazine ” Chess ” I read that the ex-World Champion Boris Spassky started to investigate and use the hypnosis in chess games in 1964.”

“Also the Patriarch of Soviet School Mikhail Botvinnik was teaching a lot about using hypnosis in chess. I am going to give now some examples when it seems that chess greats used hypnosis to get success at chess.”

“I start now with hypnotic techniques from the ex-World Champion Anatoly Karpov. Writing about Leningrad interzonal tournament in Sahovski Glasnik the International Master Josip Rukavina was praising a lot Karpov’s play in that tournament where he won together with Viktor Korschnoj ( Karpov won on Sonneborn-Berger System ).”

“Rukavina still mentioned some unpleasant thing about Karpov which is that he is constantly starring at the opponent during the game!”

“Rukavina was at that tournament minus four ( in the bottom half of the table ), still he managed to beat both Mikhail Tal and Viktor Kortschnoj ( Korchnoj received a mate! ).” 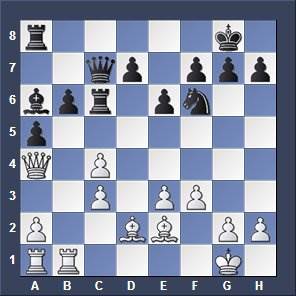 “The position (above) is from the game Rukavina-Karpov, Leningrad ( izt ) 1973.
White is already worse due to weak pawn on d4. Still he can fight on with the natural 1 Qb3 intending e3-e4 and Bd2-e3, but for some strange reason he plays 1 Rb2??? Bxc4 after which Black won the pawn and the game.”

“13th World Champion Garri Kasparov also used hypnosis in his games in order to win the games. This position (below) is the famous 11th game from the match Kasparov-Karpov in 1985, at this moment Karpov plays increadible 22…Rcd8 and resigns after 23 Qxd7! Rxd7 24 Re8+ Kh7 25 Be4+.” 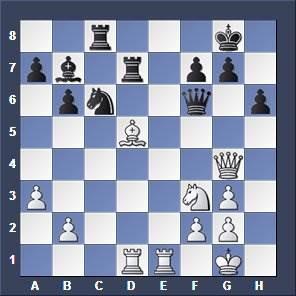 In his peak time the most famous Yugoslav player Ljubomir Ljubojevic used to have a lots of luck. There was a rumours that he uses hypnosis in order to achieve success. This was perhaps possible while he was having a lots of energy. 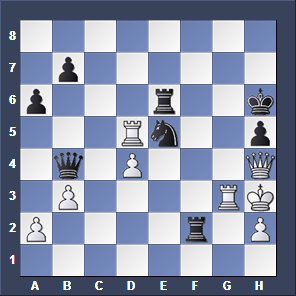 The position above is from the game Ljubojevic,L-Govedarica,R, Zagreb Yugoslav Championship 1977. Black to play can play the obvious 1…Qd2 after which computer gives plus 10 advantage for Black. Instead he played increadible 1…Rf5??? loses all advantage both material and positional after which the game ended up in a draw in a Rook endgame!!!

The position below is from a game of the match between Kortschnoj,V and Spassky Boris, Belgrade 1977.

In this position White can simply play 1 Qc3 with approximately equal game.

However Kortschnoj had a fatamorgana thinking that he is mating Black’s king.
So he continued 1 Bxf5?? Rxf5 2 Qxf5 Bxf5 and resigned because after 3 Rh8+ Black has the simple 3…Kf7. 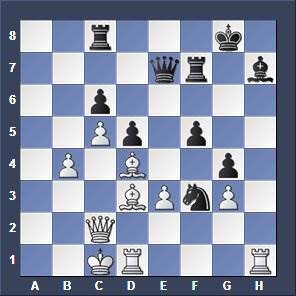 The position below is from the game Kortschnoj,V-Karpov,A, Baguio 1978 World Chess Championship. At that moment Kortschnoj played 1 Ra1??? and received a forced mate after 1…Nf3+! 2 gxf3 Rg6+ 3 Kh1 Nf2 mate. 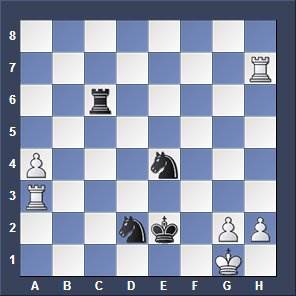