I follow the footsteps of Grandmaster Lalic to learn more about his chess strategies.

Grandmaster Bogdan Lalic (rated at around 2500 ELO) is a chess professional from Croatia and was awarded the title of a grandmaster in 1988.

Bogdan is travelling from one tournament to the next in Europe and makes a living from playing chess. When he takes part in a tournament he gets free accomodation (only grandmasters get this). Sometimes he has to share a room with three other players. (“Who is snoring?”)

He believes that the existence of computers has made it harder for him to make points nowadays because his lower rated opponents are hard to beat as they have memorized a lot of opening lines and are well prepared with the help of computers.

However, he himself carries around a laptop all the time and prepares himself as well before each round.

He does not think that computers had progressed chess but believes they made profession miserable for most of chess professionals.

GM Baburin Alexander: ” Croatian GM Bogdan Lalic was born on the 8th of March 1964. For many years he has been my teammate in the 4NCL where we both play for Wood Green. Bogdan is an incredibly knowledgeable player and he must be one of the most active tournament players in the world. His best rating so far was 2600 (July 1997) “.

I will quote Bogdan Lalic very often on the following pages. Please keep in mind that Bogdan is a Croatian chess grandmaster and it is not expected that his English is free from grammatical errors. We want to learn something about his chess and don’t care about perfect English grammar. By the way, my English is also not perfect either, because I am a German native.

Comments by Bogdan Lalic
“I had some chess coaches but mostly I improved myself. My first coach was MK Samovojska Anton ( now a well known journalist ) in Chess club PTT Zagreb, but that was for a very short period, then it was his brother, then MK now FM Samovojska Damir.”

“They were both ok, but nothing special. We used to, after training, to play blitz using then famous Garde clocks, then trainer was for a brief period the late IM Bukal Vladimir, in fact he helped me a lot. He taught me the Benko Gambit with Black and French with Black and 1 c4 English with White, and the Fianchetto against KID, and Ben-Oni with White, he was good ).

Then came GM Hulak, he also had a training in club as Bukal did, he taught me nothing.

The most of his trainings were some boring pawn endgames triangulation and mating with Bishop and Knight. he would always set up position and go to another room to smoke.

Before that club time ( Chess club PTT Zagreb and Chess club Mladost Zagreb ) taught me first my late father Dr Dragan Lalic and after that his late brother, Ing Mladen Lalic, who was a 1st category player.

But I repeat, I learnt mostly myself, much more than all those coaching, by playing ( rapidplays, blitz tournaments ) going to play countless rapidplay tournaments and open tournaments first in Italy, Austria, Germany, then in Spain etc, accumulating experience and reading books. This helped me about 90% and the rest 10% was a coaching ( IM Bukal Vladimir, the most helped ). If you are not a fanatic then nothing will help you and those endless coaching time will be just a waste. In fact the best advice gave me the last GM ( first Croatian GM Mijo Udovcic ) during Youth Championship of Croatia ( he then would help the best ten juniors during the competition ) – Study positional players RUBINSTEIN AKIBA and NIMZOWITCH ARON – then I switched from 1 e4 to 1 d4 and started to gain good results in both junior and senior competition ( a master strength ). I liked very much Rubinstein, especially with the white pieces. Nimzowitch I only used rarely with Black in the French.”

“They (computers) have just progressed the level of play, but profession had been destroyed. Chess cannot and should not be played by the memory, this is why we have to start either Capablanca-chess by adding 2 more extra pieces or Fischer-random chess. Home preparation should be put to zero.”

“Before I was living good by beating patzers and drawing with other GMs, now this is not possible. I hate computers, kill all computers, f*** them! It is enough to stop playing chess, if for 50 moves you cannot beat 1800 player regardless to colour.”

Below I like to introduce some of Bogdan’s chess strategies who came first place in the Magistral De Ajedrez Ciudad De Jaen, Spain 2013.

How to beat the Kings Indian Nc6

Play the e4 variation to trade off the light colored bishop and bring your king to safety via g3 and Kg2. After this play the move 12.a4!

Black gets into a passive position and just kills himself. Watch how White plays the c-pawn to c5 and trades on d6 to open up the queenside after which he penetrates there. This is the same procedure like in the first game (Kings Indian) as the pawn structure is similar.

In the following game White (Bogdan Lalic) attacks the c-pawn with bishop f4 right in the opening. The black pawn on c7 will remain the topic throughout the game and White tries to apply pressure to this pawn in various ways. To understand this underlying motif is necessary or you will not understand the game. All forces and activities are directed towards the queenside for that reason, to attack and win the c-pawn. 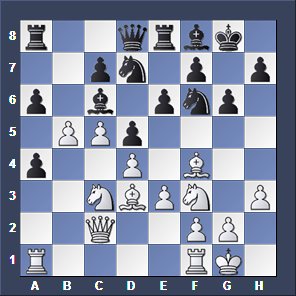 Question: Why does White play 17.b5 and trades his good bishop d3 for bad bishop c6 later on?

Answer: 17 b5 is very strong because he cannot defend well the pawn on c7. 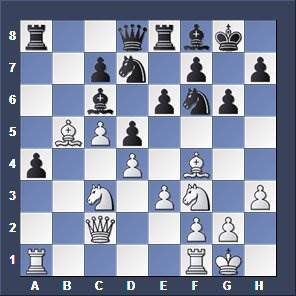 My Question: Does this mean that all actions and all forces are directed towards the queenside to win the c-pawn? And that it is not important that White gives good bishop for bad bishop?

Answer: “Good and bad bishop, it is all abstract, the only what matters is that I win something ( if I do not do it quickly advantage will disappear )”

IM Guillermo Baches: ” Elo is shit, it just depends on whom you play and when you play, now you have to play 3 games a day and share a room with 2 other guys, it is a miracle you are not under 2400 yet. God bless you “.

Bogdan Lalic: ” Nowadays in modern time which flies fast, we can see it in everyday chess life. I played in the last 9 days 13 elo rated games ( this includes a travelling from Spain to UK ). In the old time we had rest days, now we have two rounds per day. To whom can this be good? To young players who have well versed repertoire so they can play 3 games a day without a preparation ( they are young computer robots – or computer parrots do not need a preparation because they are theoretically prepared in advance ). DISGUSTING. “

Easy Way to equalize for Black against 1.d4

Question: Is there any secret to this variation?

Answer: “White cannot play 5 Ng5?? because of 5…Qa5+ winning a piece, many players ( even one IM ) had fallen into this. I was playing this line with Black with success, look at the database.” 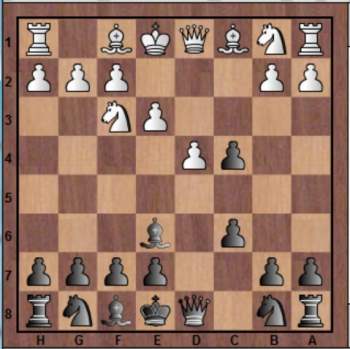 “The nightmare tourney of 40 days is over for me. I gave the word I will never ever play in any tournament in either of France, Spain or Portugal. It is over for me with those countries. For those 12 days I lost 12 new Elo points, which makes me down to the lowest ever point of my career Elo 2433.

The bad luck started from the very start, the first tournament in Paris Rapidplay Arqueil, where I had 5,5 out of 7 ( quite strong rapid tournament with 3 GMs, 3 IMs and 1 WGM competing ), and finished 4th, but there were only 3 prizes.

Then I played in the Over 50 Veteran Tournament in Muret near Toulouse, where I finished 1-2 with 5,5 out of 7 ( again that damned number ) but was 2nd on bucholz. There were 10 prizes. Then I was lucky in logical/mathematical solving test in Benasque where I finished 2nd and won 180 euros.

Then I was very unlucky in Benasque blitz tournament, where I played well but repeated the black pieces in 8th and 9th round after beating strong GM Papp with Black in the 8th round and drew in the last round against Romanian IM Ardeleanu.

However new bad luck was, that the prizes were decided upon number of wins and here I was the worst, because I had 4 draws and 5 wins!!! Also the organizers took 19% of that very small prize of 40 euros. Terrible.

Then in the open tournament I withdrew after 9 rounds ( 4 wins and 5 draws ) because if I would have even won the last round ( which is very unlikely because I would have played White against very strong GM Vocaturo Elo 2592 from Italy ) I still would be without prize because of bad bucholz.

Then I played in Vitoria Gasteiz tournament where I shared the 3rd to 12th place but finished 11th because bad bucholz again ( I took two buys there ). Of course there were 10 prizes only.

And the final blow came in Gijon tournament where with 6,5 out of 9, I again finished without prize ( 10 prizes ). Maybe I will get the best prize from the Veteran ( one hat and the book from GM Zenon Franco in Spanish ). Terrible.

This is not a life. I lost 40 days of my life travelling all over Europe, from Hastings to Zagreb and financially will be in loss 200 euros. Ok for the food I would have spent 200 euros, if I was at home for 40 days, but I am sorry that is not a life any more.