“Hard time for me continues, I drew in the 1st round of Benasque open tournament. It was the first round but accelerated system and I played against young underrated player from Madrid elo 2271 whom I could not beat in the last round of Mostoles rapid tournament last year ( it was also a draw ).

This time I did not play the Catalan but it was different opening, the Queens Gambit Exchange Variation, the line in which I have very good results but with this move 11…Ne6 I had only one game ( with IM Dastan in Budapest 2012 which I won ).

At the end I do not know where is my mistake but position was equal, I think I have to take on e5 and play Rook to g4, but then he plays Rook to e4 and I am not better, his pawn on a3 is very strong.

It is just because he is quite good with shitty elo of 2271, this is my problem and in Benasque you have 100 players like him. Chess is definitely SHIT.” GM B.Lalic

“The tournament in Benasque started not good, first game I drew against young player from Madrid Martin Duque ( who I could not beat in the last round of Mostoles rapidplay in 2012 with white, also was a draw ) and now I am playing with FM Gavilan to whom I lost in Jaen 3 days ago against whom I blundered a mate in 3 moves after which game I did not play the last round.

Now tell me if this is not a destiny – if the tournament could have started worse that it is for me?

Maybe I am cursed who knows but instead of getting some help from God ( some luck ) he punished me with always the most difficult tasks. I think that God is horrible and people should not obey him because he is not righteous.” GM Lalic

“I won in the 2nd round of Benasque open tournament. So that was my revenge to Andaluzia Champion FM Gavilan for the loss in Jaen Open tournament after which I quit the tournament there.”

This game above was a massacre – (comment by Administrator)

“I won in the 3rd round of Benasque Open tournament. His counterplay using square e5 was not enough, he just had too many positional weaknesses and his attack could have succeded only in case of my gross blunder.” GM B.Lalic

I like the way how GM Lalic plays versus the Dutch Defense (Leningrad Variation). He plays Re1 and pushes the e-pawn forward to gain control over the important center square e4. He gains space at the queenside and neutralizes the pressure along the f-file playing Be3 that protects the square f2. See diagram below 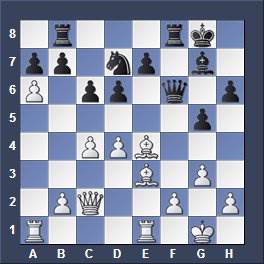 White has two active bishops, controls e4 and has space advantage at the queenside. Black has a badly placed knight and his pawn c6 gets weak and nothing goes at the kingside. Black has a depressed game and is losing.

This year GM Cifuentes Parada Roberto is not playing in Benasque open tournament despite the fact that he is living not that far ( about 140 kilometers away in Huesca ).

Maybe he was not invited this year because last year he quit the tournament after 7 rounds ( after 2 defeats in a row ). So it is becoming dangerous in Benasque not to come to the game.

This year there is a new rule which says that after one unjustified not coming to the game the player is excluded from the tournament. So it is best to play all 9 games to the end.

I think, this is no problem, GM Lalic has a much higher rating and he probably wins! – (by Administrator)

And indeed GM Lalic did win this game and played with White versus the Slav Defense. Black opened up the position too early and came into trouble as his queenside bishop got cut off. White had better piece coordination, was better developed and had the two bishops. Finally White (GM Lalic) entered a better endgame and won.
TOP MOVE is 16. Bf4 – See game below

“Today I am Black against the young upcoming Grandmaster from Azerbaidzhan Durarbayli Vasif, elo 2590 ( born in 1992 ). He seems to be playing a lot ( Asia and Europe ), full of energy young and aggressive player. I have to be aware in order to stand his assault.

It is very difficult to play with the young brains which are younger than you 25 to 30 years, they remember the variations 10 times better than you ( better memory ) so it is impossible to enter against them in some kind of boring positions where the memorizing is of the secondary importance, but what are those positions and where to find them? Heeeeeeeeeeeeeeeeeeeeeeeeelp!!!”

Unfortunately GM Lalic lost this game due to some minor inaccuracies.

“Today Ulf Andersson did not come to the game against WIM Sgircea whom I beat yesterday. Tournaments in Spain are complete shit, something is not normal. In the last 2 years I lost 6 games and now in just 14 games I lost 3 games. Here is impossible to play chess, everyone plays like a computer, fuck Spanish tournaments.”

“I checked up my game today, I lost because of 17…Bd6? move. His Qxg4 is an important novelty which refutes the system. GM Simon Williams had one game with Black in 2008 but his opponent 2200 elo played the weak move 18 Rxg4 and Williams won.

So this is clear why Simon Williams is now around 2450 elo – his lines are crap ( there was even a video on that line ).”

“I am now crap 2470 elo or so like a complete patzer because I play a lots of openings, but I do not know them in depth ( I work at home 0 hours per day on chess ) so when I play with experts I lose always, because I know one key move less than them. Fuxx chess from 21st of century, I do not belong to that idiotic world of books, computer, videos, bases, etc, fuxx that so-called modern chess.”

“So the variation is playable and interesting for Black, but it requires dilligent home preparation and I could not remember the first move starting with 17…Nxf6, I rejected it because I did not like my position after 18 Bf4, but then 18…Qh5! is fine for Black. This shows what is modern day chess, you must have all analysed before the tournament ( parrot like chess ), if you play one worse move you are dead, because now opponents are so fantastic prepared.”

“The following sent me GM Bojan Kurajica: ” Right now I am playing a tournament in Cannes. I have 3.5 out of 4. With a bit of luck I could have had 4. I guess I am getting old…. By the way, I cannot help waiting to see whether your prophesy will come true. I have been below the 2500 mark the last 2 months. It is not a long period but it is getting on my nerves…

As to your chess, I think you are exaggerating a bit. In my opinion , you are still a 2600 player. You only have to believe it. Too many short, uneventful draws have been your undoing. Just disregard your fears. Losing a game is not a tragedy. Say, you could lose 2 games and win 7 – and still win the tournament. So bear up and play for a win.
Best wishes, Bojan”

In the mext game GM Lalic played more risky. He had Black and played the DRAGON. What can be more dangerous than playing this opening? Nothing! Guess what! He won that game.

“I won in the last round of Benasque open tournament and managed to win the prize.” GM Lalic