” GM Andrei Kharlov 1968 – 2014
Sad news from Russia. Grandmaster Andrei Kharlov passed away on 15 June in Kazan, aged 46. He had many successes as a player, and also worked
much as a trainer, especially in recent years. He also assisted Garry Kasparov at the 2000 Classical World Championship match.

Kharlov’s peak Elo had been 2656 (achieved in 2001). At his last tournament, the Nezhmetdinov Memorial in Kazan, which finished on 8 June 2014, Kharlov scored 4/9 looking unhealthy during the event…”

“I am amazed why so far nobody has publicly said the cause of death of GM Andrei Kharlov.

In the photo from his last tournament it is clearly visible that he has short cut hair and that something is wrong. I suspect it was a chemoterapy involved. It happened all so sudden.”

“Basically if someone like GM Kharlov drops down almost 200 elo points in the last 12 years from his peak elo of 2656 in 2002, this
surely must have been connected with some serious health problem.
Whether this happens to the player of age 35, 45 or 55 has not so great importance, to lose 200 elo points even in 12 years little by little is
not normal if the health of the player is normal.”

“I know that most of the chess players ( like me ) are scared to go to a doctor because they are scared that some tumour or cancer will be detected. However, from other point of view to detect desease on time can save someone’s life and serious drop of elo must surely be
the sign of deteriorated health. Beware.”- by GM B. Lalic

“This is incredible GM Andrei Kharlov had against GM Vassily Ivanchuk 1,5-0,5 score and against GM Jan Timman 1-0 while against me
(GM Bogdan Lalic) he was losing 1-2 and against GM Komljenovic Davorin 0-1, he seemed to be like a Robin Hood taking from rich ones and giving
to the poor…”

“I checked on FIDE site, Andrei Kharlov had last Elo 2477 for the new July list losing 15 points. So in fact 2462, knowing that he
was 2656 in 2003 it is almost 200 Elo points difference which means that he must have been long time ill which affected his Elo.”

“This is the game (below) which my friend GM Komljenovic Davor
had against Andrei Kharlov. It was in the last round of Malaga
tournament, where Kharlov was leading the whole tournament and
Komljenovic won and came 2nd, at the end Kharlov was lower than that, I
do not recall it because I was not playing in the tournament.

Study this interesting endgame, Komljenovic was telling me
that when Andrei saw that he is losing against the pair of Bishops and
passed pawn of Komljenovic, he started to cry during the game. I think
Kharlov was a very strong player but in life quite unlucky.
Rest in Peace: Andrei Kharlov.” 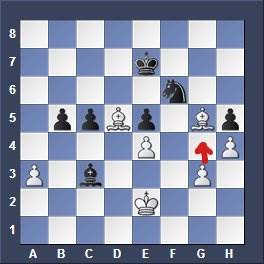 after 1 g4! GM Kharlov started to cry…because of 1…hxg 2.h5! and White is winning as he gets a strong passed h-pawn