“The following is the game from the open tournament in Bulgaria which just finished and in which a young Russian boy elo 2190 beat Montenegro GM Dragisa Blagojevic.

Here is the game, Blagojevic was 100% sure that he (his opponent) used a computer during the game because from the move 10 to move 36 the boy played all moves first choice of rybka (strong chess program).

Chess Grandmaster Blagojevic played one more round in the tournament and left the tournament because he felt that he was cheated. Here is that infamous game:” – by GM B.Lalic

“It seems that we are living in the ” chip era of chess ” – after “computer era of chess!” – Comments by GM B.Lalic

I replayed and checked the game with HOUDINI, the strongest chess program worldwide and found that many moves are the same moves that HOUDINI would have played. Especially the rare move 11.Rc1 and then 14.Rc5 are computer moves and there are many others. – Comment by the Administrator

“Again strike, but this time control of flights, of course in France, started yesterday. Because of that today allways delays ( almost missed a flight because of that ), they did not know from which gate flights are going until the last moment.

For the first time I suffered claustrofobia ( going from departure to the flight there was an immense number of passengers like me, they almost started a stampede. I thought that they are doing that by intention to screw the passengers, but this is all done due to damned French ( last time train strike now flight control strike ).

What do they want those fuxxers? They have very good salaries and still do not want to work. Someone should be in chains for these crimes!!!”

I won in the 1st round of Jaen open tournament.

The opponent was an amateur who had Elo 1882 which is 600 points lower than GM B. Lalic. The black move 5…b5 enters a side variation to lead the opponent into unknown territory.

After 18 moves Black (GM Lalic) has a very small advantage because the strong white queenside bishop at b2 gets traded off versus the bad bishop of Black and White has slightly weak pawns on c4 and a4 which are attacked by a black knight. Furthermore the white kingside bishop g2 is “dead meat” as it is blocked by its own pawns d5, c4, a4 which are sitting on white squares, this limits the bishop’s power. See below 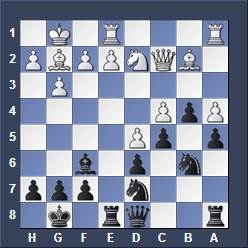 Later I played very good and I was lucky that the position was still winning for me ( 53 Re5! cutting his king was decisive ), you can see you can spoil even almost plus 5,0, according to computer, if you play on time ( I hate that 30 seconds extra, instead of me winning on time he had suddenly 6 minutes and 4 moves before he had 4 minutes and losing on time ). Still I won.”

Back to – Chess Strategies
Go to – How to play Chess – Home