To learn how to play chess it always helps to gain valuable insights into the thought processes of a grandmaster who plays chess for a living. Listen to the advice of Grandmaster Bogdan Lalic (Croatia) who is playing chess in European chess tournaments constantly.

“I drew in the 6th round of Memorial of Jessie Gilbert tournament. I was winning but he started some counterplay with f2-f4. I panicked and sacrificed the pawn after which he had 2 pawns for exchange and safe position. At the end is equal position, in one moment I was sure that I was going to win, but then he started to play all forced only moves.

Shit happens always when you play young underated player, I already drew with him earlier last year at Basingstoke even with white pieces, he won 2 months ago in Big Slick IM tournament with 7,5 out of 9 scoring first IM norm so clearly underated player. Coulsdon is a shitty tournament full of underated youngsters, this is why my elo there always suffers ( not only mine, of GM Feygin and others as well ).”

“Interesting line for black avoiding a lots of theory against 1 e4 and striving to play Caro-Kann type of positions.”

Judge yourself, here is the game. I should immediately quit chess after that. No, I did not underestimate him, I prepared for him four hours but he did not do many mistakes, at the end he defended very accurately. I did not have a clue it exists the move 7…Nc6 ( I only knew the old theory 7…Nd7 and 7…c6 popular from the matches Botvinnik-Smyslov ), he told me it is in Chess Quality book by John Nunn repertoire for Black!!!

Increadible, amateurs in england 2000 elo know more theory than me. I think this is pretty disgusting, this is why english amateurs are the best in the world ( and this is why it is bad for elo to play against them ) because they have the best chess literature. Anyway, here is this sad game.”

I often change my openings, however, this is not enough because now patzers are well prepared for many openings.

” Hi Bogdan!
I know how you feel… The amateurs are not the same as they were in the 1980s and 1990s! Your opponent played well above his rating. I am playing in Italy – I won 2 games, but could easily lost both – to 2030 and 2238 guys!! I am going to do something about my chess – will talk about that later!
Regards”

Another Draw against lower rated Player

“It is not the first time I drew with a player under 2000 elo, it happened very recently just 16 months ago in La Roda open I was then also white against young 15 years old player from Madrid, I was winning that game two extra pawns, but I just relaxed only for one move and he got practical chances due to my exposed king. I had to win the last game to break even with elo, whole tournament I was losing elo due to this damned draw.”

“Here we see in action former 2600 player grandmaster Azer Mirzoev trying too hard to win equal position and losing to a player of elo less than 1800!!!”

Black (Grandmaster) could win immediately with 41…f4 as after this the queen can go to the open h-file.

Another GM bites the Dust

“In the following game Spanish amateur of elo 2100 beats the grandmaster with Black using the plan of Viswanathan Anand in Semi-Slav – it is disgusting, this just shows how due to technology in 2013 chess is virtually D E A D.”

“This is a diagram from the game Smyslov-Petrosian, Amsterdam candiates tournament 1956. Here the late ex-world champions Vassily Smyslov played the antipositional 1. Bxf6? giving the pair of bishops, later Black was easily winning, but White miraculously saved a draw. This example shows how much the level of play had gone up – a thing that even 2000 elo players would reject, taking on f6 at the first glance and would go for some more logical moves like 1 Ng5 or 1 Nd2 instead.” 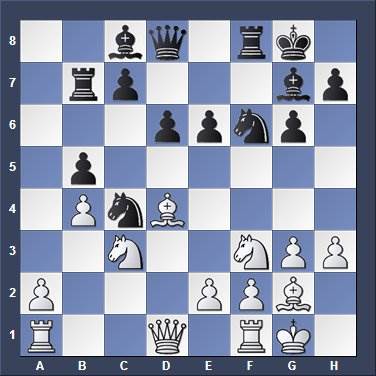 GM Andrei Deviatkin: ” Generally, the tendency of modern chess is clear: the overall level is constantly being improved, because engines and databases are excellent teachers available to everybody. As a result, it’s getting more and more difficult for a GM to defeat a 2200-2300 player, especially if one doesn’t have many ambitions.”